The Job takes place at the center of the clash between the Afghani and Pakistani Taliban, the Pakistani government, and the U.S. in the 2000s. The following timeline is designed to create a broad historical context for the events of the play. Events referenced by the play are in bold.

1947 - Partition of India:  Muslim state of East and West Pakistan is created at end of British rule.  Hundreds of thousands die in widespread communal violence, and millions are made homeless.

With support of US, Pakistan, Iran, and Saudi Arabia, Mujahideen groups intensify opposition to Soviet Union.

1985 - Half of Afghan population displaced by war, many fleeing to Iran or Pakistan.

US supplies Mujahideen with Stinger missiles, enabling the shooting down of Soviet helicopter gunships.

1990 - Benazir Bhutto dismissed as Prime Minister of Pakistan on charges of incompetence and corruption.

1997 - Taliban control two-thirds of Afghanistan and are recognized as legitimate rulers by Pakistan and Saudi Arabia.

1998 - US launches missile strikes on suspected bases of Osama bin Laden, accused of bombing US embassies in Africa.

2001 - September 11: Al-Qaeda attacks the World Trade Center and the Pentagon.

President Musharraf of Pakistan backs US in attacks on the Taliban and al-Qaeda. Anti-Taliban Northern Alliance forces enter Kabul.

2008  September - President George Bush sends an extra 4,500 US troops to Afghanistan in a move he describes as a "quiet surge.”

2015 June - Pakistan acknowledges that eight out of ten Taliban members jailed for gun attack on Malala were secretly acquitted at a trial in April.

The Job is set in Swat Valley in the Khyber Pakhtunkhwa region of Pakistan, near the border with Afghanistan. This map of the administrative divisions of Pakistan shows the border, the region, and cities referenced in the play. Source: CIA World Facebook. 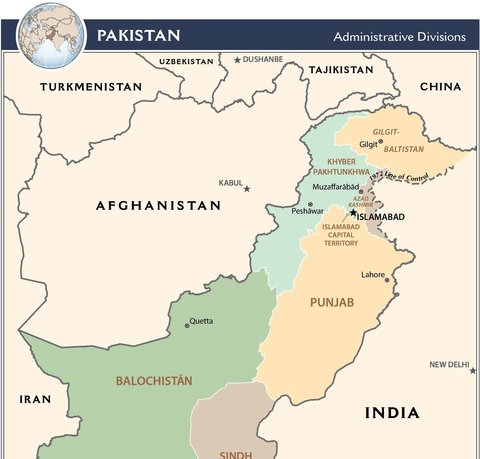